As we move into 2011, a little time to reflect on the musical high’s of 2010!
It has been a real pleasure this year to work again with Straight No Chaser and The Tony Strudwick Orchestra and am looking forward to working with both again in 2011. I hear there may be another Cyprus tour next year with Tony and am already booked for a Hassocks Hotel gig with SNC – a great trumpet section there and some cool charts too. This is not your average rehearsal band!
Hooking up with Tony again has also been fun – I spent nearly 10 years as his lead trumpet back in the late 80’s /early 90’s.
On the Orchestral front, this has been another busy year with The Sussex Symphony Orchestra – it’s a shame I wasn’t around for the Mahler concert though as the Violin soloist on the programme, Ben Baker, was someone I had fixed through by then boss! The Beethoven 9 helped to make up for that and of course, the opportunity at Christmas to get the Fanfare Trumpets out for the Nigel Simmons Christmas Carol charts! 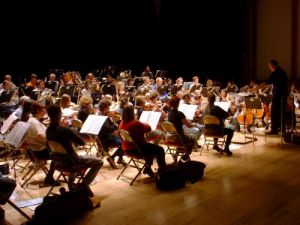 Looking forward to next year, we have a rare opportunity to perfrom the Berlioz Grande Messe Des Mortes together with the Southern Festival Chorus.
Another first for me this year was performing Stabat Mater by Karl Jenkins with the Sinfonia of Arun & The Billingshurst Choral Society. as a result, a CD of this is now in my car! (available from Amazon.co.uk !)
Finally, my work with brass bands has continued with Uckfield Concert Brass – resurgent now under new MD Nick Morris. Looks like it might be another busy year in 2011!

I’m concious I haven’t written much about music of late – the day job has been a major focus of late!

Once again, I found myself guesting with the fabulous Straight No Chaser Big Band – firstly at the Forest Row Festival, then at The Hassocks Hotel in a gig that featured the amazing  Mark Bassey on trombone.

I always enjoy working with these guys – check out their current recording work in progress here.

That was followed by a great Sussex Symphony Orchestra gig in Eastbourne for the Rotary Club – nice to have a big crowd in the Congress Theatre for a “Last Night of the proms” style concert.

Then to finish off , the mayhem that is Lewes Bonfire with Uckfield Concert Brass – we appear briefly around 4 mins 25 secs into this video.

Next up: Beethoven 9 with the Sussex Symphony Orchestra and a Tony Strudwick Orchestra gig “Wings over Barking & Dagenham” at the Broadway Theatre, Barking.

As it’s holiday season, there hasn’t been much to write about until now!
It was a real pleasure to be asked to work with Sussex Brass, a band that I was a founder member of some 30 plus years ago and the engagement?  The Midsomer Classic Car show – clearly, not all the car owners in Midsomer have been murdered – yet! And of course, no John Nettles as our contribution is part of the first episode with Neil Dudgeon in the lead role.

The band played a new arrangement by Jim Parker of “In an English Country Garden” – Jim was on set today and seemed very happy with our rendition of his arrangement.
.
A new experience for many in the band today was miming without being able to hear the music – we recorded that first.
Neil was kind enough to pose with the band:
. 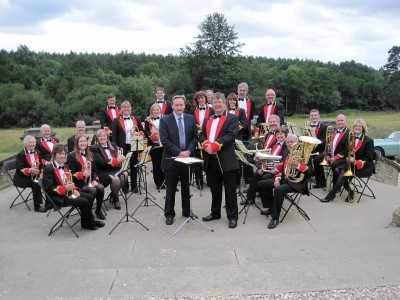 Neil Dudgeon and the band on set of Midsomer Murders

It’s been a while since my last post – just too much stuff going on right now! So, this post is a catch up on the last few gigs!

First up, I had the opportunity recently to conduct Brighton & Hove City Brass for a couple of rehearsals whilst their regular MD ws on holiday. Preparing them for an 1812 concert was a pleasure and nice to have the baton again. In the middle of all that, it was back to playing on Eastbourne Bandstand for a proms concert with Uckfield Concert Brass – and this is where the Vuvuzela’s we all bought at the South of England Show came to the fore. The hornpipe will never be the same!

Then it was on to St. Dunstans for a gig with the Dave Masters Band – I haven’t played with them for a long while so it was nice to see a few old faces!

After a brief week away in Portugal, it was straight back into it with the Sussex Symphony Orchestra – this annual event in Haywards Heath is always a great gig and this year, we had the pleasure of working with Aled Jones and Faryl Smith – a great voice for someone of her age.  It was also good to catch up with another old friend, John Watson, who was playing with a trad band as part of the warm up – I haven’t seen him in over 20 years since my days with Greg Wills’ Dirty Bakers Dozen and the Sounds of Swing.

Finally, an other opportunity to dep at a rehearsal with Straight No Chaser – I love playing with these guys as they have some great jazzers and a great pad! Nice to hear John Brown’s flugel in Marianne for example. and a reminder of what a great bonew player Tim Wade is.  Also good to see yet another old friend, Phil Paton, who was also sitting in as a dep. Phil & I were both with the Paul Turner Big Band in the 80’s when we were on Wogan, with Tony Strudwick and also with my own Classic Dance Band.

Next up is another Uckfield Concert Brass gig where I am also filling in for the MD who is away followed by another conducting opportunity in Midsomer – lets hope it’s not the MD who is the victim! More on that later.

Well, what a concert that was! The SSO, under the baton of guest conductor Paul-Elliott Cobbs performed once again to the usual high standard we have come to expect. What we didn’t realise was how good our guest soloist was! Irene Enzlin from the Menuhin School gave us an awesome performance of the Elgar Cello Concerto. I predict a very bright future for her if this was anything to go by!

Coming up next for the Brighton Festival Fringe: 2 Operas in one concert! Visit  http://www.ssomusic,com for more info.

Following a quiet spell of late, things have been hotting up! Next weekend, 22nd May, we have our contribution to the Brighton Fringe Festival – “One Night – 2 Operas“. The 2 operas are Tosca and Madame Butterly. So, a quiet night in the brass section!

The details are now out from “It’s Magic” as to who will be performing with the SSO this year at the Haywards Heath prom – Aled Jones & Faryl Smith are now confirmed. (Many of you will have heard Faryl over this weekend singing “Abide with me” at the FA Cup final). For more in formation, visit http://www.itsmagic.org.uk/events/aled_jones.phtml

Back to the world of Brass Bands, this weekend saw the SCABA Entertainment Contest where I was performing with Uckfield Concert Brass.  With a new Musical Director, we were hoping to emulate the 2009 result which I’m pleased to say we did!  The band came 2nd plus received a soloists award for trombonist, Steve Walkley and an award for best MD for Nick Morris. All in all, a good day out at the office.

Whilst I’m sure our audience loved the concept of the best of 2 opera’s in one night, performed by The Sussex Symphony Orchestra, sitting on the 2nd Trumpet chair gives you a different perspective!. In Gene Hunt’s world, purgatory included the Railway Arms and Luigi’s. In the world of the trumpet, it is more likely to be a never ending Puccini opera on 2nd trumpet!

So, I was very pleased to be asked to dep once again for a Straight No Chaser rehearsal and the sub sequent gig on Sunday 31st May at the Hassocks Hotel. Speaking of which, I came across 3 videos of my last appearance with them. .

Click here for “Is you Is” or here for “It’s oh so quiet”. These were taken at a gig last year in Hove Town Hall.