It’s been a long time since I wrote a music specific blog and since I started my new job, music has often taken a back seat. As we launched our new customer community this week, one of the off-topic questions posed was “What are your 15 minutes of fame?”.

And I have been very lucky to have had a few things captured on Video that could be captured in a blog post rather than fill my forum response with YouTube video!

First up, British TV show Midsomer Murders – this video has sadly been deleted and the replacement you have to pay for! So, here’s the band under close arrest with Inspector Barnaby!

If you ever get to see this, the musicians amongst you will note that the music doesn’t always match what I am doing as the conductor – it’s not because the band didn’t follow me but is due to the fact we were miming to the track we had recorded earlier in the day but without the benefit of being able to hear it!

Another occasion when I couldn’t hear something was an appearance on the BBC’s “National Lottery Live” show one Christmas. I was conducting “Uckfield Concert Brass” on the opening of the show – this went fine at rehearsals when I could hear the producer counting down. However, when we went live, I only just spotted his fingers in time as he was silently counting down! A close thing but we came in spot on time!

Next up is an appearance with The Sussex Symphony Orchestra as featured on BBC South Today – this was filmed during our annual Christmas concert in 2011:

Unfortunately, not a lot of good footage is available of the next set from my time with the Paul Turner Big Band. When I first met Paul, he told me the band would be on the top BBC chat show “Wogan” within the next couple of months. I didn’t believe him but we were not only on the show once but followed up a year later with a special show with James Stewart! There are 3 small extracts from those 2 shows which have come to light though:

Of course, the music had to be Glen Miller for James Stewart!

It’s not all video though – I had the pleasure of performing with The Sussex Symphony Orchestra on “Crowded Streets”, an album of music by British composer Paul Carr on the Claudio label – also now available as mp3 download on Amazon!

The Sussex Symphony also gave me the opportunity of performing in front of thousands of people with Katherine Jenkins & Aled Jones (of “Walking in the Air” fame).

Finally, I spent around 10 years as Lead Trumpet with The Tony Strudwick Orchestra during an era when there were still plenty of gigs backing famous stars in local cabaret clubs including Vince Hill (had a bit hit with “Edelweiss”), Susan Maughan (famous for “Bobby’s Girl”), Jane McDonald (of “The Cruise”)  and as support act for bands such as Showaddywaddy and The Dreamers.

My favourite picture though has to include a trumpet player – it was an honour to perform twice with the legendary Kenny Baker, former lead trumpet of the Ted Heath Band. The first time was during my pupil’s course at the Royal Military School of Music, Kneller Hall as part of the St. Cecilia concert. Much later though, Kenny came down and played with The Sounds of Swing big band where I was Lead Trumpet at the time. I love this picture! 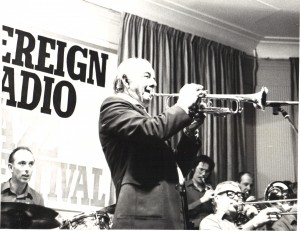 Kenny Baker with the Sounds of Swing

If nothing else ever happens in my musical life, I have been blessed with some great memories!