As well as being a player myself, there is nothing quite like attending a great gig – and I have been to a few this year.

First up was Seth Lakeman in Oberhausen. I have been a big fan of Seth since first hearing him as support act to Jules Holland in Brighton. Whilst you will find his CD’s under “Folk Music” at your local record store, his music will appeal to a much wider audience than that. Judge for yourself:

Next up was my favourite band of all time, Yes. I have seen them a lot over the years but this was the first time I got to meet them. Sadly, Chris Squire is no longer with us but Billy Sherwood does a brilliant job and has history with the band. It was a great gig in a smallish venue in Bonn – I had a great seat and this was probably the best mix of any gig I have been to – possibly due to the venue size. At previous gigs, the keyboards were too much in the background for my liking and the bass over-dominated.
This will not be the last time I see these guys!

I couldn’t find any video from the Bonn gig but this one is the same tour from The Albert Hall:

Sadly, I was unable to find a reason for being at my offices in San Jose for the US leg of this tour which included part of “Topographic Oceans”. Hopefully, that will come to Europe next time around. I did though ask the band when they were going to resurrect “Relayer” – possibly the album most Yes fans want to hear performed live again. (I saw part of it in 1975 at Loftus Road – imho, their best album). From Alan White’s response, I wouldn’t totally rule it out for a future tour! Great to also talk football with Geoff Downes.

The next gig was one I enjoyed a lot more than i thought I was going to!

As part of a conference I attended in LA, the main act for our conference party was Pitbull!
Now, I wouldn’t normally go to a Rapper’s gig but this guy really surprised me. An excellent set, polished performance and a great backing band too.

More recently, I saw Deep Purple for the first time! And with Ian Gillan back in front of the band, this was always going to be a great gig – and it was. Forget Ritchie Blackmore, Steve Morse is a fabulous guitarist and whilst Jon Lord is sadly no longer with us, he bequeathed his Hammond rig to his successor, Don Airey. This was classic Purple. 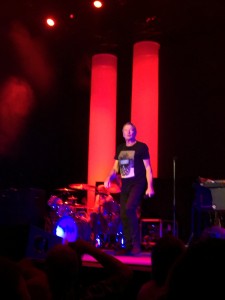 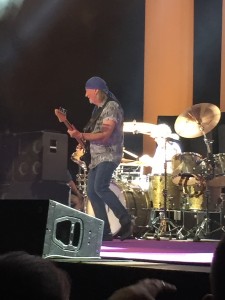 I was stood just behind the guy who posted this live footage from the gig at the Koenigpalast, Krefeld – normally an Ice Hockey venue!

And a brilliant support band too – De Woolf from Holland. Check out a live performance from the tour here: